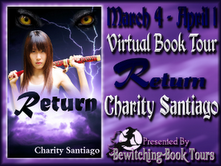 I usually tell people right off the bat that Charity Santiago is my real name. I always get asked if it’s a pen name, but nope, it’s all mine. I’m a Leo, a cowgirl, a writer, a major cinephile (don’t ever challenge me at any movie trivia board games), and an avid reader. In addition to writing books, I also attend college full-time and contribute book reviews, movie reviews and DIY tutorials to a blog called The Creation Experiment (http://sablejane.blog.com).

I’ve always been a storyteller, so I’ve been writing my entire life. The incident that finally pushed me to publish my work on Amazon, however, occurred in early 2011. My son, who was seven months old at the time, was hospitalized for respiratory issues, and I began reading books out loud to him on my Kindle. One of those books was “Switched,” the first installment in Amanda Hocking’s Trylle trilogy. Then my dad emailed me an article about Amanda, and I discovered that she was self-published. My first thought was, “Hmmm. Maybe I could do that.”


2. How long did it take you to write Return?

“Return” was a work-in-progress for ten years! However, for eight of those years, it was just sitting in an email folder, stagnating. I went back to it in 2011 and decided to finish the story. I would estimate that I’ve put between 250 and 300 hours of actual writing time into “Return.”

“Return” was the last book I wrote that I didn’t have an outline for. After the first fifteen chapters, I realized I had no idea where the story was going, so I sat down, outlined the trilogy and then did rewrites. The plot for “Return” has been rewritten three times, not counting all the editing changes, of course. The most recent rewrite involved changing the ages of characters to make the novel more appropriate for young adults.

Oh, this answer is going to sound terrible! I actually head for the bargain bin first because I love finding deals on books outside of my preferred genres. There’s only one bookstore in my town, and as a result I buy most of my books on Kindle, but when I do go to the brick-and-mortar store, I look for bargains before running over to the young adult section.

When I’m writing or school is in session, I’ll read probably between five and eight books a month, and it kills me because I feel like I’m missing out on so many wonderful new authors! When I’m in-between writing my own novels or on a break from school, I’ll read around fifteen books a month. I try to review at least one of those books every week on my blog, and I’m slowly learning to rate and review them all on Goodreads.

My favorite character changes every day, but it’s usually safe to go with any character from Jane Austen’s “Persuasion.” I think Anne Elliott is gorgeously complex, in a way that makes you want to be Anne Elliott- if only so you can be gorgeously complex, too. There are so many pitfalls in fiction, one of which is to make your character too perfect. Anne can be used almost as a paint-by-numbers tutorial on how to make a character flawed, but still appealing to the reader.

1. I don’t like chocolate.
2. I am a huge fan of mindless action films.
3. My husband says I’m a dork because my dream car is a Prius.
4. My least favorite chore is doing dishes.
5. I never know how to respond when people see my two-year-old son, who is adopted, and tell me, “He has your eyes!”

The Young Adult genre has claimed my heart irrevocably, but I also read any kind of romance or horror.

I am reading “Hearts of Ishira” by Bethany Aan, and “River’s Recruit” by Charlotte Abel.

“Hearts of Ishira” was loaned to me by a friend after I posted on my Facebook that I’d like the opportunity for more steamy romance reads, and so far, this book is delivering. The plot is interesting, too. A ship of human women crash-lands on an alien planet, and the women encounter a race of male humanoids who have already been living there for ten years. You can imagine where it goes from there.

“River’s Recruit” was provided to me by the author in exchange for an honest review, and even though I’ve only finished the first couple of chapters, I’m loving it already! The heroine seems strong, feisty and independent- totally my style.

The book that has stuck with me through the years is “Garden of Lies” by Eileen Goudge. I came across it in a box of books my mom picked up from Salvation Army when I was twelve or thirteen, and I read it cover-to-cover several times. I still keep a copy of the book in my car so I can re-read it any time I’m stuck somewhere. That was really the first book to introduce me to the concept of fictional angst and unrequited love.

Yes! I am currently writing “Blood Lust,” the first book in a new paranormal romance series. This series is about a secret war between a North Dakota werewolf pack and an invading vampire coven, with a newly-turned werewolf named Eve caught in the mix. Where I focused more on the action and story in “Return,” I have slowed down a lot with “Blood Lust” and am letting the two main characters write their own romance. The end result is equivalent to a sexy, slow burn, and I couldn’t be happier with the way things are shaping up.


Here’s your chance to market your book. Describe it. And why readers should pick it up?

There are so many reasons why you should read “Return,” but here are just a few:

The heroine is a butt-kicking ninja. When Ashlyn Li is surrounded by a dozen masked attackers, she doesn’t cower in fear and pray for someone to come rescue her. She throws off her cloak, draws her katana and starts fighting for her life.

Ashlyn’s two love interests offer something for everyone. Drake Lockhart is a mysterious vampire who captured Ashlyn’s heart three years ago, but he offers no clues as to whether or not he reciprocates her feelings. If you’re not into stoic vampires, there’s also the sexy Spartan assassin, Vargo. Vargo is outspoken, sardonic and sometimes adorably annoying, but he makes no secret of how he feels about Ashlyn.

“Return” is a young adult paranormal fantasy featuring magic, vampires, martial arts, and shape-shifting. Fans of paranormal romance can enjoy it just as much as fantasy addicts. And if you’re looking for action, this book has that, too.

Clutching the reins in one hand, Ashlyn moved her other hand inside her cloak, drawing a small bo shuriken from the pouch on her belt. She preferred her sword or her larger hira shuriken, but both were strapped to her back, beneath her cloak, and there was no way to reach for them inconspicuously.
The thunder rumbled around her, and Ashlyn held her breath, waiting for the next flash of lightning. When it came, she saw with some alarm that her attackers were even closer than she expected- mere strides away.
Her heart pounding, Ashlyn flung the first shuriken at one of the three figures in front of her, and was reaching back into her pouch for another before the first reached its mark. As she spurred Suki, the first shuriken landed with a distinct thunk, and the man cried out. Suki leaped forward, colliding with a second attacker, and Ashlyn threw the second bo shuriken before pulling a knife from its sheath on her thigh. She crouched low over Suki’s neck and stabbed blindly in the darkness, aiming for whatever she could get, but the knife sliced only air.
One of her assailants caught hold of Ashlyn’s cloak, yanking backwards and nearly choking her. At that same moment, Suki whinnied in fear and reared up, and Ashlyn realized that there would be no outrunning this attack.
Kicking her feet out of the stirrups, she vaulted backwards, executing a flip before landing on the slippery grass. Ashlyn spun furiously, collecting her cloak in one hand to drag her attacker closer. She could barely make out his silhouette, black on black in the thick onslaught of rain. She dropped to one knee, quickly unlatching the throat clasp on her cloak to free herself, and stabbed the man in the leg. He went down.
With the cloak gone, Ashlyn yanked the hira shuriken off her back, barely getting a chance to wrap her fingers around the weapon before she was tackled from behind. She hit the ground hard, slipping and sliding on the wet grass. There was a sharp stab of pain in her right side, and she gasped, her cry cut short as her assailant hooked an arm around her throat.
Suddenly fire flared up around her, flames billowing and hissing in the rain, and Ashlyn panicked, realizing that her opponents were equipped with stanes.
Ignoring the agonizing pain in her side, she rolled over onto her back and struggled furiously to loosen her attacker’s grip around her neck, but he only clung more fiercely. Ashlyn’s eyes began to water. She shifted her grip on the shuriken and brought it down behind her, stabbing the man with the pronged spikes of the weapon as he lay between her and the ground.
He cried out and released her immediately. Ashlyn leaped to her feet, whirling and slicing down at his throat before ducking underneath a punch from another black-clad figure. She danced backwards and drew her sword, sheathing the shuriken on her back in the same smooth movement. There was a crackling behind her, the telltale sounds of a fire stane sputtering to life, and Ashlyn tensed, mentally cataloguing her collection of stanes and trying to figure out how best to retaliate. She turned, throwing up an arm as she prepared to cast a spell to defend herself.
What she saw stopped her cold.
Drake Lockhart stood before her, his long coat skimming the grass. His eyes flashed red in the semi-darkness, the reflection of the firelight dancing wildly in their crimson depths.


In February 2011, Charity Santiago's 7-month-old son was admitted to the hospital with severe respiratory issues. While Charity stayed at his bedside, she kept them both entertained by downloading several books on her new Kindle and reading them out loud. It was during this time that Charity learned about Kindle's self-publishing program, and realized that she had an opportunity to share her writings with the world.

Charity is a native of southeastern Arizona, and a writer since childhood. She wrote her first manuscript, Guinea Pig Code, at age nine. When she’s not writing books, Charity spends her time reading on her Kindle, wrangling children, watching Sylvester Stallone movies and pursuing a degree in Education.