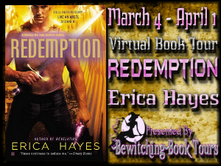 Little Blurb about yourself: I'm an Australian living in the UK, where it's neither warm nor sunny. I write paranormal and urban fantasy romance, and sci-fi. My cat is fat and orange. I am thin and pale, have no fashion sense and watch too much bad TV. Trust me, my characters are way cooler than I am.

I don't think you 'become' a writer. You either are or you aren't. You can become a better writer as you learn your craft. But the fire of story has to light you up, or why would you bother? I don't believe you can learn that urge.

But I became an author because of too many dull day jobs :) I finally realized that all the things I enjoy, and can do well, are impractical as far as a paying career goes. Shrug. Oh well, I thought. Better broke than bored. And here I am…


2. How long did it take you to write Redemption?

About five months, but I moved countries somewhere in there. That takes up a bit of time! I find it really hard to get back into a manuscript once I've stopped for a few weeks. The longer I leave it, the harder it gets…

The plot? Never. I work it all out beforehand. Probably in far too much detail ;) I'm what you might call an obsessive plotter. Making it up as I go is far too terrifying. I like to know where I’m going!

But I do a lot of subtle revisions, especially with the romance storyline. Just to make sure the hero and heroine suffer as much as possible for their happy-ever-after, bwahaha…

The fantasy/sci-fi section. If there's a romance section, I check that out too. Usually I'm looking for urban fantasy or paranormal romance, sometimes high fantasy.

But it's different in different countries. Few Australian stores have a romance section, though that's changing. And as I've discovered, in the UK, PR and UF tend to be shelved under 'horror', and the romance section is full of pink books, or books with cartoon shoes on the front. Go figure.

It varies. Sometimes heaps. Sometimes almost none. I try to read as much as I can, but unfortunately it's one of the first things to fall through the cracks when I've got lots of work on.

You mean ever? Wow, that's a hard one. Characters are fascinating for so many different reasons… In high fantasy, I'd have to say Arithon from Janny Wurts' Wars of Light and Shadow, and Tyrion Lannister from GRRM's Song of Ice and Fire. In urban fantasy… hmm. Probably Cal and Niko from Rob Thurman's books.


7. State 5 random facts about yourself.
I love chocolate cake. The more chocolatey, the better.
I play the oboe and saxophone. With varying levels of skill.
My dog is named Arnie, after the Governator.
I once worked as one of those nice people who call you up while you're eating dinner to ask for money. Worst job ever.
I just spilled coffee on my favorite pair of purple tights. Damn it.

A crit partner's manuscript. It's a sci-fi romance. Looks good so far!

Ever? Wow, keep the hard questions coming, why don't you… 'Best' is very different to 'favorite'. There are plenty of fabulous books out there that aren't my cup of tea.

But the 'best' book I've read recently is one I happen to love, and that's BRING UP THE BODIES by Hilary Mantel. I've only ever managed to make it through two Booker Prize winners, and they're both hers :)

I have a short vampire romance coming out soon called HUNTER'S HEART. It's about a demon-slayer who's forced to team up with her enemy, a powerful shadow demon. Slaying, hot romance and betrayals ensue.

And I'm working on something brand new and sekrit right now. Mwahaha…


Here’s your chance to market your book. Describe it. And why readers should pick it up?

Five quick-and-dirty reasons to pick up REDEMPTION:
1. This truly awesome-to-behold cover art. Does he look crazy or what? Flaming golden wings, oyy…
2. the Apocalypse. Plagues of vampires, oceans of blood, the sky raining fire. Bring on the End.
3. An ice-prince angel hero with a fiery warrior's heart. Japheth might try to be sinless, but he's a fury explosion just waiting to happen.
4. A dead cool vampire assassin heroine. Rose is tough, skilled, shows no mercy… but inside she's poisoned with guilt.
5. Deliciously evil demon villains. They want your soul – hell, they want everyone's soul – and since they have no conscience, they'll stop at nothing to win.


Erica Hayes was a law student, an air force officer, an editorial assistant and a musician, before finally landing her dream job: fantasy and romance writer.

She hails from Australia, where she drifts from city to city, leaving a trail of chaos behind her. Currently, she's terrorizing the wilds of Northumberland.


Where you can find Erica Hayes: