Author Guest Post: The Killer Poet's Guide to Immortality by A B Bard 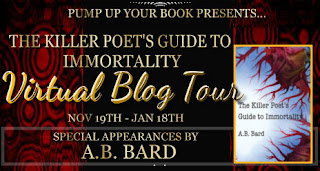 I am a writer with a multiple personality. That makes me two writers. No three. No – well, as you can see, this is not an argument I can win.

One of my personalities is AB Bard, the anarchic author of The Killer Poet’s Guide to Immortality. If I told you what it’s about, I’d have to kill you. But I assure you, it is an uplifting story.

Another of my personalities is as a writer of serious historical fiction. There’s the perennial Kindle favorite (former #1 on KINDLE!) Just Deceits: A Historical Courtroom Mystery. And there’s the less flashy but more meaningful Bones Beneath Our Feet: A Historical Novel of Puget Sound. You can’t go wrong with either one.

I don’t much like selling myself, so I often make fun of the process. This doesn’t really get me anywhere, but it feels good. If you are a writer starting out on this path, there are really two schools of thought. One (the one we hear more of in these mercenary times) is to figure out what the market wants, then try to write it, and market the hell out of yourself. The other is to write what you love, the market be damned! The first is like any other job, only less likely to pay anything, so I figure what’s the point of being a writer if you aren’t writing what you love? You might as well make widgets for $11.95 an hour. At least then you could afford a bowling league.

As you can tell, I’m a firm adherent to the second school of thought, which is more like playtime on the recess than school. I recall the graduation address given by IF Stone the famous investigative journalist to my class at Reed College. His totally serious advice to the graduates boiled down to this: Have fun! Life’s short, enjoy yourself. If you’re always worried about what’s next, you’re likely to miss the joy right in front of your nose. That’s my writing philosophy, and my living philosophy. And that’s about the only thing that all my personalities can agree on.

The Killer Poet’s Guide to Immortality is the riveting tale of a frustrated poet who decides that the best way to get his work read is by pinning it to corpses with a dagger. Alternately profound and hilarious, this novel chronicles in rapid-fire succession AB Bard’s obsessive murder spree, rise to media notoriety, capture, trial, and execution by lethal injection.
Then it presses further, into the future . . .


About the Author:
Reclusive Seattle author AB Bard’s poetry has twice been nominated for the Pushcart. He is the author under a pseudonym of two other hysterical novels, or perhaps historical novels, neither of which is funny. Mr. Bard is not now, nor has he ever been, a member of the Republican Party. Mr. Bard does not Tweet. He was awarded a sheepskin (BAaa) from Reed College Sleeper Cell. His one super power is the ability to repel all conventional measures of literary success. Mr. Bard is lap to a cat, pal to a girl, God to a dog, & dog to the Man.

To find out more, please visit him

Email ThisBlogThis!Share to TwitterShare to FacebookShare to Pinterest
Labels: A B Bard, Author Guest Blog, Pump Up Your Book Tours