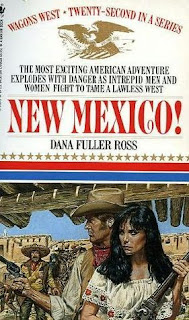 No marshal's badge or sheriff's posse had yet brought law to the sun-drenched adobes of the great American Southwest. White settlers, Indians and Mexicans trembled in fear under the azure sky of old Albuquerque, as they prayed to God that the cruel renegades called the comancheros would spare their women, their homes and their lives. But outside this thriving city the comancheros were gathering...as the time neared when all would feel the terror of the desperadoes' lust for cruelty and gold.

NEW MEXICO! The hostile desert and hidden arroyos offered cover to a roving band of killers. No soldiers could catch them; no settlers resist them. So upon the broad shoulders of Toby Holt, son of the West's greatest trailblazer Whip Hold, would be laid a desperate burden--to travel into this no-man's-land and infiltrate the deadly gang. And as Toby left behind his beloved Alexandra, perhaps forever, his friend Henry Blake would wrench himself from a Baroness' arms to thwart a deadly plot abroad. But no one faced more peril than the brave young woman photographer whose indomitable American spirit fueled her courage to survive captivity among the fiercest savages...as Toby Holt raised his rifle to fire in the name of justice in this land of blood and honor--NEW MEXICO!