Author Guest Post: The Sons of Jude by Brandt Dodson 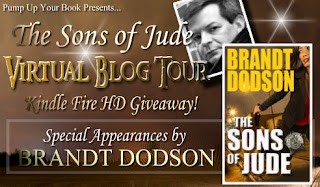 The Pleasures of Research
I'm a writer, a novelist, and I usually enjoy the research that comes beforethe drafting of any novel. Sometimes I sift through the library or the internet, but sometimes I want the first-hand experience. Because I write crime novels, and because I come from a long line of police officers and was once employed with the FBI, I often draw on my experience to add a level of credibility to my work. I've been in prisons, county jails, and lockups. I've fired all types of weapons, and have ridden in patrol cars with sirens blaring. This is important in crime fiction because the reading public is far more sophisticated today than it was in the time of Chandler or Hammett, thanks to television shows like Law and Order.

Although I have written a number of crime thrillers, I usually chronicle the exploits of Colton Parker, an ex-FBI agent-turned-private eye based in Indianapolis. In THE LOST SHEEP, a novel featuring Colton, I knew it would be necessary to set the story in Las Vegas, a city I'd never visited. In order to lend an air of authenticity to the book, I decided to take a trip. I took a friend along with me (who we shall hereinafter refer to as "George" - not his real name) who had once lived in the city and who agreed to shepherd me around.
We arrived early one evening in February and went directly to a casino. Given the fact that a good number of my novels take place in seedy locales, the casino trip was for my own edification rather than as a setting for the story. Still, George thought it was a good idea and I went along. Easy me.

Within a few minutes, we were standing at a table while George explained the nuances of the game. We weren't there very long before I felt a presence looming over us. I turned to find two of the biggest security officers I'd ever seen standing directly behind us.

"What are you doing?" one of the asked.

"Are you counting cards?"

"Are you a funny guy?" He wasn't kidding.

"Look," the other guard said, "if you don't leave, we're going to arrest you."

George tugged at my jacket. "C'mon. Let's get out of here."

We left the casino and began walking south along the strip. Across the street from our position was a rather nice-looking hotel. George explained that the elevators slide sideways rather than vertically, and that I should ride them for the experience. Being from southern Indiana where we don't have such things, I agreed.

We entered the very nice lobby of the beautiful hotel and began riding the elevators. They did indeed did slide upward at a near forty-five degree angle, quite different from anything I'd ever seen, and we were having fun when the door opened and the third security guard of the evening filled the doorway.
"What are you doing?" he asked.

I hesitated before answering this time. "Riding the elevator," I said, my voice squeaking like a second pass through puberty.

We shook our heads.

"Then you are trespassing. If you don't leave, I will have to arrest you."

"I need to see the police station," I said to George. "I need to get a feel for it."

He suggested we drive south on the strip to the Central Division of the Las Vegas PD. I did and pulled around behind the station to a parking lot that was fenced off with a ten-foot tall chain-link fence. Several dozen police cars were parked there, and I got out of the car, leaving the engine running, and climbed the fence to count the cars. That would give me a basis for determining the number of officers in the division. Before long, a patrol car pulled up and the officer got out of the car. Staring at me as I hung on the fence, he asked, "What are you doing?"

I jumped down and explained the situation. He was very understanding, but did radio in to the office and had the dispatcher search Amazon to see if I was who I said I was. When he determined that I was, he graciously answered all of my questions, then told me to leave or he would arrest me.
We left the station house and drove north to a wedding chapel to ask if a couple would allow us to watch their wedding. I originally had a chapter in the novel set in a Las Vegas wedding chapel so, again, it seemed like a good idea.

The chapel was very busy and when we arrived we had to stand in line at the reception desk. When our time came, George and I approached the young woman who very nervously held out her hand and declared, "Guys that's not legal here. Sorry." She smiled.

The trip to Las Vegas was eventful, though not as eventful as it could have been, and gave me a different perspective on research. Although I still prefer to visit a city in person and still prefer the first-hand experience, I'm a lot less uncertain about doing a good portion of my research on the internet.

No one ever asks me what I'm doing there. 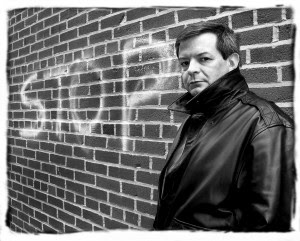 Brandt Dodson was born and raised in Indianapolis, Indiana, which he would later choose as the setting for his Colton Parker Mystery series. Although he discovered in grade school that he wanted to be a writer, it would be another twenty-one years before he would put pen to paper.“I knew in fifth grade that I wanted to be a writer. Our teacher had given each of us a photograph which we were to use as inspiration for a short story. The particular photo I was given was of several young men playing handball in New York City. I don’t remember all of the particulars of the story now, but I do remember the thrill that writing it gave me.”
Later, while in college, one of Brandt’s professors would echo that teacher’s comment.

“But life intervened and I found myself working at a variety of jobs. I worked in the toy department of a local department store and fried chicken for a local fast food outlet. Over the course of the next several years I finished my college degree and worked for the Indianapolis office of the FBI, and served for eight years as a Naval Officer in the United States Naval Reserve. I also obtained my doctorate in Podiatric Medicine, and after completion of my surgical residency, opened my own practice. But I never forgot my first love. I wanted to write.”

During his early years in practice, Brandt began reading the work of Dean Koontz.
“I discovered Dean’s book, The Bad Place, and was completely blown away by his craftsmanship. I read something like 13 or 14 of his back list over the following two weeks. It wasn’t long after that I began to write and submit in earnest.”
Still, it would be another twelve years before Brandt was able to secure the publishing contract he so desperately desired.

“I began by writing the type of fiction that I enjoyed; I wrote edgy crime thrillers that were laced with liberal amounts of suspense. Over the years, I’ve begun to write increasingly more complex work by using broader canvases and themes.
Since securing his first contract, Brandt has continued to pen the type of stories that inspired him to write when he was a boy, and that have entertained his legions of readers.

“I love to write, and as long as others love to read, I plan on being around for a long time to come.” 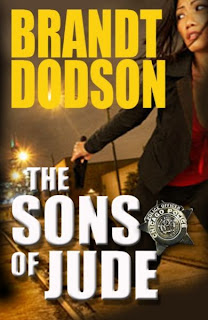 When Chicago detectives Frank Campello and Andy Polanski are assigned to investigate the murder of Trina Martinez it seems like an ordinary homicide. An unfortunate young girl in the wrong place at the wrong time has been brutally murdered. But their investigation is halted by a wall of silence, a wall erected by powerful interests that will render their inquiry a lost cause.
Then they enlist the support of reporter Christy Lee – and come under immediate fire. Polanski is arrested. Campello threatened. Christy is attacked.
It’s the case that every cop gets. The one that changes his life. The one where justice is elusive and the hunter becomes the hunted.
Frank Campello and Andy Polanski are The Sons of Jude.

Pick up your copy of The Sons of Jude at Amazon

a Rafflecopter giveaway
Posted by SueFitz at 12:01 AM