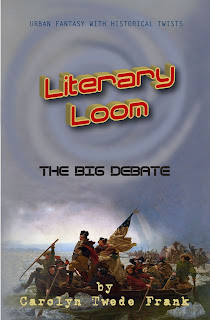 A bizarre corpse . . .
A strange girl . . .
A creepy teacher . . .
A cool invention . . .
Combine these with an old school and a new student anxious to fit in—and the adventure begins.
Fifteen-year-old Josh’s big mouth gets him in trouble at first. But after walking in the shoes of great men of history in the Literary Loom, he uses that mouth to bring down the bad guy and ultimately solve the mystery behind the murder—and the strange girl.

“Mr. Ingles was lying on the floor, in front of the soon-to-be-dismantled time machine, as lifeless as a brick.”
“Dead?”
“There was no way he could be alive. They didn’t even bother to take his pulse.”
“So, they should have at least tried,” Josh insisted. “Did they call 911? Or did they forget the number?”
“It wouldn’t have done any good,” Ester said solemnly. “They didn’t know where to take his pulse.”
“And you said these men were brilliant? Even my dog knows where my wrist is.”
“They couldn’t find Mr. Ingles’ wrist—or his arms. He was just one mass of flesh, intertwined with streaks of white cotton and blue denim, with a head in the middle. His eyes were still open, frozen in a look of horror.”
“Weird.” Josh wanted to take another step backwards—more like a hundred.
“Yeah, weird was the word the police used.” Ester’s voice wavered. “Weird was written all over the coroner’s report. And weird was the synonym people attached to our family.”

Josh didn’t have a clue what to do if all the troops were not off the island by daybreak—neither did his character. Then he felt his head bow and his eyes close. A simple, but powerful plea parted from his lips. “Please, dear God, help us. Our cause is just, our hearts true. We have nowhere to turn but to Thee.”
Feelings surfaced that spoke of his character’s spiritual side. No specific religion had its claims on Washington’s devotion, but it was unmistakably clear that his belief in a divine creator was as solid as his commitment to this new nation’s cause. And for some unexplained, but undeniable reason, the two were connected.
Josh looked up into the early-morning sky. Darkness faded to shades of yellow-gray in the east. Dawn loomed near. He moved his gaze to the bustling makeshift docks that continued to load men like cattle onto barges. As far as his eye could discern in the murky light, soldier after soldier awaited their turn, wearing the faces of trapped animals. No way were they all going to make it.
The light in the eastern sky continued to increase. But as it grew, so did something else. It rolled in like a thick blanket from off the water, covering the exposed soldiers that were losing fast their cloak of darkness: fog . . . on a summer morning. Unheard of that time of year.
“General Washington,” the officer supervising the docks yelled. Josh rode over to where he believed the dock to be, dodging soldiers as they grappled through the fog.
“Yes, Captain,” Josh said when finally in view of the officer—six feet away.
“Do we continue the retreat, General?”
“Yes.”
“But this fog is worse than navigating in the night.”
“Precisely,” responded Josh with a lift in Washington’s spirits. “If we can’t see each other past six feet, neither can the enemy. Continue until all the men are safely off the island—or the fog lets up. Whichever comes first.” 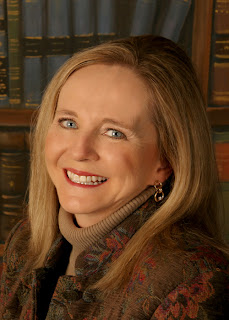 Carolyn has always liked to create. There were always gardens full of beautiful plants in her life, plenty of frilly, homemade dresses for her daughters—and don’t leave out the puppets. Ever since third grade, Carolyn also liked to write. She is the author of Promises, a teen historical fiction novel, and the author/illustrator of two children’s picture books. Carolyn lives in Utah with her husband and teenage daughter, where she runs her puppet-related business in between family time and writing time.

Email ThisBlogThis!Share to TwitterShare to FacebookShare to Pinterest
Labels: Book Excerpt, Carolyn Twede Frank, Giveaway, I Am a Reader, Rafflecopter