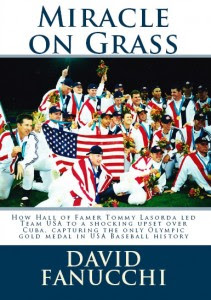 ABOUT MIRACLE ON GRASS

Miracle on Grass is the true story of how the 2000 USA Baseball Olympic Team – an unknown group of American minor leaguers – stunned the international baseball powerhouse from Cuba. They were led by Hall-of-Fame manager Tommy Lasorda, who came out of retirement to lead the charge for his country, and they pulled off the greatest upset in Olympic baseball history. Their triumph was remarkable, but the story of their coming together is even harder to imagine. Miracle on Grass is Fanucchi’s first-hand account of the events that took place over a two-year period, and an intimate, perceptive portrayal of the three incredible weeks Team USA spent in Australia, climaxing with their gold medal triumph over Cuba. Fanucchi gives readers a behind the scenes look at how the MLB executives in charge of this operation went about selecting the players, how Lasorda persuaded management into giving him the opportunity to coach the team, how the Americans narrowly qualified for the Olympics during a gut-wrenching game, and how capturing the gold medal in Sydney changed the lives of every player, coach and administrator involved.

Being a avid San Francisco Giants fan I wasn’t sure I would like this true story book. It is about the 2000 USA Baseball Olympic Team and teir Hall of Fame Manager, Tommy Lasorda (boo Dodger Blue) This is the only team to have won an Olympic Gold Medal (and will be the only one unless they add Baseball back as an Olympic Sport)

This was a team of who knows who that managed to gel with the help of their manager to go on to do great things. Some of these college players went on to play in the Majors (Kurt Ainsworth-Giants, Sean Burroughs (the youngest on the team) – Minnesota, Roy Oswalt – Astros) are the most notable to have gone on. Most of the others spent time in the minors with minimal time in “The Bigs”, but for that period of time known as the Olympics they were all winners.

The way Lasorda got his team and yes it was a true team to play shows how he managed to lead the Dodgers to such success. My guess is he treated these young men as true professionals and that is why they were a success. Go USA!!
I highly recommend the book for any avid baseball fan.

As a side note the author grew up in my own backyard, although he went to a rival high school. (So the Giants and Dodgers rule throughout the story) 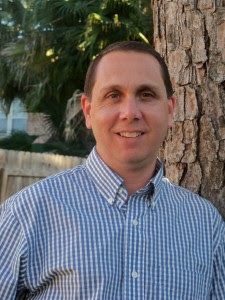 David Fanucchi was born in Burlingame, California, and was raised in the small Silicon Valley suburb of Cupertino. A 1988 graduate of Monta Vista High School, Fanucchi attended California State University, Chico, and earned a Bachelor’s Degree in Journalism in 1993. Fanucchi has spent the past 20 years working in various public relations and communications capacities for both amateur and professional sports teams and organizations.

Most notably, Fanucchi was Director of Communications for USA Baseball from 1999 to 2006, during which time he served as the official Press Officer for the 2000 USA Olympic Baseball Team that captured the gold medal under Hall of Fame Manager Tommy Lasorda. He also served as the press officer for the 2006 United States team in the inuagural World Baseball Classic – a roster that included Derek Jeter, Alex Rodriguez, Ken Griffey Jr., Mark Teixeira and Roger Clemens.

He serves as President of his own sports-business public relations consulting firm – Gold Medal PR – and currently resides in Houston, Texas, with his wife, Jessica, daughters Emma and Grace, and their dog, a beagle named Bogey.
Miracle on Grass is his first published book. You can visit David Fanucchi’s website at www.davidfanucchi.com.