Book Blast/Giveaway : A Conspiracy of Silence: The Health and Death of Franklin D. Roosevelt by Harry S. Goldsmith, M.D.

Harry S. Goldsmith takes a surprising and historical journey into the last days of one of America’s most revered leaders in A Conspiracy of Silence: The Health and Death of Franklin D. Roosevelt.

In his quest to find the truth behind FDR’s death, Goldsmith sought to find FDR’s medical records. Failing to uncover such documents, he stumbled across a secret memo. This document revealed that FDR was aware of his deteriorating physical condition and knew how it would impact the importance of Harry S. Truman’s 1944 nomination for vice presidency.

Goldsmith contends that the memo was directly tied to the political intrigue involving FDR’s last year of life. The Health and Death of Franklin D. Roosevelt also contains a host of new information regarding FDR and gives further evidence that he was well aware of the impending attack by the Japanese on Pearl Harbor in 1941. 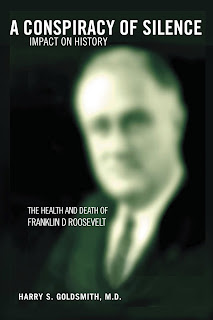 Dr. Goldsmith has been a professor of surgery for 35 years and a student of medical history throughout his life. He has invented several surgical procedures including an operation to treat Alzheimer?s disease and a procedure to treat acute spinal cord injuries. He is an author of 227 papers or book chapters, has edited three surgical texts, and has received honorary degrees from two Chinese universities. He is a surgeon, worldwide lecturer, and advisor on the application of his surgical procedures.