Three unique people— Joshua of Nazareth, Linus Flavian, and Maria of Magdala— are born in 5 B.C. during the appearance of an unusual star over the Middle East. Their lives will become intertwined through a series of events that will forever mark them. Around the time of their birth, superstition is rife. Intrigue between High Priests, the Herodians, and Rome, along with hope in an expanding world of greed and commerce, shape their differing destinies. Action takes the reader from Jerusalem and the hillsides of Galilee to the Jewish world of Alexandria, the trading centers of Petra and Palmyra, and the magnificence of Rome. Surrounded by rebellion, slavery, and their own adolescent dreams, the lives of Joshua, Linus, and Maria begin to unfold in a vast canvas covering the length and breadth of the Roman world. The first in the dramatic new series, The Magdala Trilogy, A Star’s Legacy provides a fascinating commentary on the origins of Christianity that is both challenging and yet plausible, incorporating traditional beliefs, fictitious thoughts, and new interpretations. With vivid prose and compelling characters, A Star’s Legacy offers a captivating glimpse into Biblical times and Christianity’s core ideas. 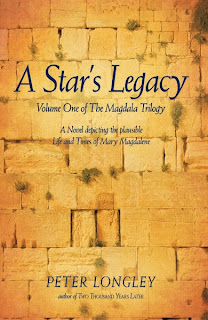 About the Author:
Peter Longley graduated with a master’s degree in theology from Cambridge University in 1970. He was a licensed lay-reader and preacher in the Anglican Church both in Ireland and the United States. Brought up in England, Longley lived in Ireland from 1966-1977. Since 1977, he has lived in the United States in Georgia, Minnesota, and Missouri.