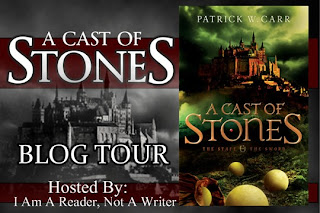 The title above is a bit of inside joke. When I ran a consulting business with my brother through the ‘90’s and early ‘00’s, we used a lot of sayings. Here are some of my favorites:

Just because you’re paranoid doesn’t mean you’re wrong. (This still cracks me up)
Why do I think everything is a conspiracy? Because it is! (This was actually a piece of dialog from a movie)
No job is too big. No fee is too big. (I’ve always loved Ghostbusters)
Nothing’s ever wasted, it can always be used as a bad example.

1. Have a friend to be your agent…even if he’s not an agent. This was my first mistake and boy was it a doozy. He didn’t know how to be an agent and I didn’t know how to be a writer. Talk about the blind annoying the blind. We got on each other’s nerves faster than Usain Bolt running the 100 meters. After a few months in which the lack of accountability finally got the best of me, we parted ways.

2. Try to shortcut the process by using friends’ connections. I’m sure this has worked for a lot of people in the past and it probably still works for people. But it didn’t work for me. A friend at church knew a high-powered agent in Colorado and gave me an introduction. I sent a manuscript and the agent made some inquiries, but by shortcutting the traditional business arrangement, I’d also forfeited two very important things. The first thing I surrendered the right to expectations. He was doing me a favor, not really taking me on as a client. The second thing I gave up was the feedback that I so desperately needed on my writing. I wasn’t producing publishable work yet, though I didn’t know that at the time.

3. Repeat step number two. This time a different friend from church gave me an intro to one of the V.P.’s of a large local publisher. By now I’d wised up a little. I’d hired a freelance editor to help me polish my work. Since the editor used to work for the publisher I was contacting, I figured I had a sure thing going. The only problem? They didn’t like it. This is where I really took a big dive into the ugly pool. I fired off an email that made me look unprofessional and probably endangered my friendship. Lesson: You can’t make anyone publish your book. It may be the greatest thing since “War and Peace” but if it doesn’t fit their catalog, they’re not going to pick it up. Don’t ever send an email when you feel like you’ve “got to get something off your chest.”

4. Try to apply self-publishing advice from a non-fiction writer to your piece of fiction. Wow. Where to begin on this? I’m not going to knock self-publishing, but the truth is self-publishing works best for non-fiction writers who have a guaranteed platform. Think radio or television personality, or mega-church pastor. For a fairly private stay-at-home guy writing young adult fiction this was a spectacularly bad idea. I sank thousands of dollars and a lot of effort into something that might have sold a couple hundred books. I didn’t have a platform and without it the marketing effort never really got off the ground.


Okay, those were my really big mistakes. I had a few other small ones sprinkled in along the way, but the ones listed above are the ones to avoid at all costs.

Now, let me tell you what I did right.

1. I learned my lesson, finally, and joined a writer’s group to work on my craft.

2. I kept working on my craft.

3. I entered contests and devoured every piece of criticism they gave me. Compliments are great, but they’re not as useful.

4. I joined a critique group and learned how to polish my writing until it gleamed.

5. I bit the bullet and paid the price to attend a conference. Look query letters are great, but the best way to get mindshare from a publisher or an agent is to get yourself to a conference.


There you go. It’s not a guaranteed recipe for success, but it’s what worked for me.

Errol swam until spots danced in his vision, his body begging for air. With a pair of strokes he surfaced like a fish breaking water, darted a glance behind before sucking air into his tortured lungs and diving again, away from the figure in black.

The sounds of his efforts and splashing filled his ears, prevented him from hearing the scream of an arrow. He forced his trembling arms forward, jerked them back to his sides. Only the movement of water against his face told him he advanced. The far bank was still thirty feet away. Violent chills rippled the water as his body fought to stay warm. His shaking limbs lurched into a parody of his usual stroke. Bolts of pain shot through his calves and thighs. His legs refused to move. They hung from his torso, dragged him down. He reached out, struck mud. One shaking hand at a time, he pulled himself forward.

At last he broke the surface. His hands clawed forward until they brushed against rough bark. They clutched the thin trunk, locking around it as if it were his last hope. Water drained from his ears and he listened for his attacker. Nothing.

Errol’s body convulsed with cold and he clutched at the sapling, straining to move, turn his head, anything. His muscles refused to obey. His hands clenched the tree, refused to let go.

Above and behind him the wail of an arrow began. He willed himself to let go, roll over, but spasms pinned him to the spot, left him helpless. The arrow’s scream grew, its pitch rising until its keening filled his hearing.

Errol sobbed, tried once more to move and failed.

He clenched his eyes against the blow. 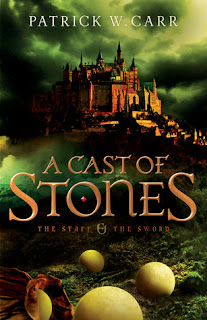 A Cast of Stones

In the backwater village of Callowford, Errol Stone's search for a drink is interrupted by a church messenger who arrives with urgent missives for the hermit priest in the hills. Desperate for coin, Errol volunteers to deliver them but soon finds himself hunted by deadly assassins. Forced to flee with the priest and a small band of travelers, Errol soon learns he's joined a quest that could change the fate of his kingdom.

Protected for millennia by the heirs of the first king, the kingdom's dynasty is near an end and a new king must be selected. As tension and danger mount, Errol must leave behind his drunkenness and grief, learn to fight, and come to know his God in order to survive a journey to discover his destiny.

Patrick Carr was born on an Air Force base in West Germany at the height of the cold war. He has been told this was not his fault. As an Air Force brat, he experienced a change in locale every three years until his father retired to Tennessee. Patrick saw more of the world on his own through a varied and somewhat eclectic education and work history. He graduated from Georgia Tech in 1984 and has worked as a draftsman at a nuclear plant, did design work for the Air Force, worked for a printing company, and consulted as an engineer. Patrick’s day gig for the last five years has been teaching high school math in Nashville, TN. He currently makes his home in Nashville with his wonderfully patient wife, Mary, and four sons he thinks are amazing: Patrick, Connor, Daniel, and Ethan. Sometime in the future he would like to be a jazz pianist. Patrick thinks writing about himself in the third person is kind of weird.

Open only to those who can legally enter, receive and use an Amazon.com Gift Code or Paypal Cash. Winning Entry will be verified prior to prize being awarded. No purchase necessary. You must be 18 or older to enter or have your parent enter for you. The winner will be chosen by rafflecopter and announced here as well as emailed and will have 48 hours to respond or a new winner will be chosen. This giveaway is in no way associated with Facebook, Twitter, Rafflecopter or any other entity unless otherwise specified. The number of eligible entries received determines the odds of winning. Giveaway was organized by Kathy from I Am A Reader, Not A Writer http://iamareadernotawriter.blogspot.com and sponsored by the author. VOID WHERE PROHIBITED BY LAW.