Love Inspired (December 18, 2012)
***Special thanks to Georgiana Daniels for sending me a review copy.*** 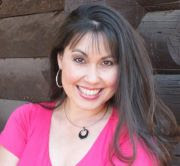 Georgiana Daniels resides in the beautiful mountains of Arizona with her super-generous husband and three talented daughters. She graduated from Northern Arizona University with a bachelor's degree in public relations, and now has the privilege of homeschooling by day and wrestling with the keyboard by night. She enjoys sharing God's love through fiction, and is exceedingly thankful for her own happily ever after.

Inheriting her estranged father's property isn't the reason Robyn Warner wanted to come back to Pine Hollow. She thought she'd make amends with her father—but his sudden death made that impossible. And when she learns the identity of the handyman fixing the run-down cabins, Robyn is ready to flee Pine Hollow again. Caleb Sloane, the cop responsible for her father's accident, just wants to uphold his promise and then return to the force. But he can't seem to walk away. After all, he understands about guilt and regret. And he'll do everything he can to help Robyn find healing, happiness and—just maybe—a lifetime of love.


If the rest of the property was in the same sad condition as the front porch with its missing rails and bowed floorboards, Robyn Warner would be in Pine Hollow, Arizona, far longer than she'd anticipated. She wheeled her suitcase over the flagstone walkway and paused at the foot of her father's home to absorb the onslaught of memories.

It wasn't too late to turn around and hand the keys back to the lawyer managing her father's estate, though the sad huddle of cabins hardly qualified as such. What had once been a cozy mountain resort now looked pitiable and highly susceptible to a stiff wind. Her father certainly hadn't done her any favors by willing the property to her, but after more than a dozen years of silence, she was glad to be remembered at all.

Gravel crunched near cabin two—Robyn's favorite during her summer vacation stays as a child. A man in work pants and a paint-splattered T-shirt meandered out from between the ramshackle buildings. "Can I help you? It's easy to get lost out here."

"It certainly looks different than I remember, but this is the right place." She shaded her eyes to get a better look at the man who was tall and muscular without being imposing. He was the most clean-cut maintenance man she'd ever seen—and a nice contrast to the surfers with sand in their hair she was used to back at the surf shop she managed in California. She propped up the suitcase. "I'm Robyn Warner. And you are?"

"Caleb." He gestured toward the road. "Pine Hollow Resort is on the other side of the wash, about five miles down. Are you sure that's not where you were headed?"

"I'm here to check out.. " She caught herself before referring to Lakeside Cabins as hers. "I'm staying here. Dan Dawson was my dad." She fished the keys from her pocket and held them up. "I'll just let myself in."

The handyman scrutinized her as though assessing her legitimacy, much the same way her half siblings, Brad and Abby, had during the funeral last week. Gauging her motives and questioning her right to be there. Her right to grieve.

He swiped his brow with his arm and slid on a pair of sunglasses. "No one told me you were coming or I'd have cleared out."

"If it makes you feel better, the lawyer didn't tell me about you, either." She offered a tentative smile. "Or maybe he did, and I was still in shock." She recalled her conversation with Phil Harding, who'd upended her world when he contacted her after the funeral and said Lakeside Cabins was hers, though all her father's personal items would go to Brad and Abby. "Do you work here?"

Caleb shuffled the paintbrush from one hand to the other. "I've been fixing Lakeside up, but I can leave if you'd rather have the place to yourself." His tone held a hard edge.

"Not at all. I'll be glad to have your help. It looks like we have a lot of work to do." Though she didn't have a clue how to pay him. She made a mental note to ask the lawyer if there were provisions of some kind. After taking an unpaid leave from the surf shop, she was living on savings—meager ones, at that. "The sooner Lakeside is all fixed up, the sooner I can sell it."

"It could take a while." Caleb's neck bobbed with a hard swallow, as though he wanted to say more. His sunglasses kept her from further reading his expression, though it was becoming clear she made him uncomfortable.

"With the two of us working together, it'll speed things along." She smiled, hoping to defrost his stoic demeanor. Having an easy rapport with the handyman would make the work and the memories of Lakeside less painful. "Either way, I'll be here as long as it takes. But please, keep doing whatever you were doing." She gestured toward cabin two. "Every little bit helps."

Caleb offered a curt nod before he crossed back over the clearing and disappeared behind the small building.

Wind moaned through the trees, sending birds skittering from the branches. Robyn rubbed a chill from her arms. Something about being in the quiet space where her father lived so many years without her, so many years without birthdays and Christmases and simple phone calls, left her unsettled. She wished she'd disregarded her mother's repeated warnings to leave her dad and his family alone, that she was no longer welcome to visit. She should have at least tried to make peace. Now she'd never have the chance.

Robyn drew a fortifying breath before inserting the key into the lock. She worked the key and turned the knob several times, but it refused to budge. Before she could shimmy it out and try again, the phone in her pocket rang. Her thumb hovered over the button until she finally worked up the courage to answer. "Abby, how are you?"

"As good as can be expected. Listen, Brad and I haven't finished moving everything out yet, so he wants to make sure you don't take the armoire in the bedroom." Abby's voice had matured and no longer resembled the giggly pre-teen Robyn remembered.

She plugged her ear to drown out the wind. "I haven't even been inside yet. Trust me, I wouldn't have a way to move the furniture out even if I wanted to." She glanced at the rental car she'd put on her painfully thin credit card.

"Sorry, I know it's awkward." A long pause stretched over the line. "Brad just wants me to remind you that the furniture and personal belongings are ours. We'll be back to get them."

"I haven't forgotten." She swallowed her sadness. She and Abby had once been close until the argument that drove Robyn away from Pine Hollow—an argument with their father about how she felt less important than his other children. Lately she'd begun to crave the closeness of a real family, and now that circumstances had brought her back, she'd do whatever it took to restore her relationship with Brad and Abby. To find some sort of normalcy.

"Good. We wouldn't want any misunderstandings."

"Abby, I would never take what doesn't belong to me." She fingered the cross on her necklace and prayed for wisdom. "Maybe when you come out for the furniture we can have dinner. We have a lot of catching up to do."

Silence pulsed between them until Abby cleared her throat. "I'm not sure that's a good idea. We're still shaken up."

So was she. The tragedy of losing a parent—even an estranged one—was overwhelming.

"I mean, why would Dad leave Lakeside Cabins to you? No offense, but you haven't exactly been around."

The words stung with truth, and her face heated from the rejection. "I understand. Give me a call when you're ready to come by."

The line went dead. "Is everything okay?"

She whipped around, disconcerted. "Caleb, you startled me." She scanned his face to figure out how much he'd overheard. His expression remained neutral behind the sunglasses, which left her even more flustered.

"I heard voices and thought maybe you were talking to someone."

"I was. It was a private conversation." She jammed the phone into her pocket.

"I was only trying to help." Caleb held up his hands in surrender, then turned and stalked off.

"Wait." She scrambled down the stairs, her sandals slapping the wood. Exactly why she chased after the maintenance man or even cared what he thought, she'd have to reason out later. "I didn't mean to snap at you."

Caleb angled toward her, his mouth quirked. The masculine scent of turpentine and hard work drifted off him, and for some reason, it wasn't entirely unpleasant. "Apology accepted." His somber tone seemed to say otherwise.

Robyn ran her hand through her hair, snarled from the wind. "Really—I'm sorry. I'm not exactly great company right now after what happened to my dad. I'm normally easy to get along with—you'll see when we fix this place up, and before you know it I'll be long gone."

Judging from Caleb's formidable posture and the twitch of his jaw, her departure wouldn't be soon enough.

Caleb stormed into the office of Harding and Company and bypassed the receptionist. Without knocking, he entered the office of Phil Harding, attorney-at-law. "Why didn't you tell me she was coming?"

Phil tapped the keys on his computer without missing a stroke. "Almost finished. Then we can talk."

"You should've at least given me a heads-up." He pulled the door closed with a thud. "Didn't you think I might need that bit of information?"

All the way from the outskirts of Pine Hollow, he had rehearsed the diatribe he wanted to unleash on his so-called friend. But none of his imagined scenarios included Phil calmly pecking away at the keyboard.

Phil closed the program and spun around in his leather chair. "I presume you're talking about Robyn."

"Who else?" He dropped onto the cushioned seat, and if he dirtied the upholstery with his paint-stained pants, so be it.

"She showed up." Simply arriving at the cabins was enough to infuse him with a jolt of reality. What originally seemed like a brilliant way to fulfill his promise quickly turned into the single worst idea he'd ever had the moment Robyn, with her sun-bleached hair and sorrow-filled eyes, told him she was Dan's daughter.

"Look, Caleb, I realize it's a little awkward."

"You think?" He blew out a frustrated breath. "I tried to play it cool in front of her, but you have no idea what that was like."

Phil removed his wire-rimmed glasses and wiped them with a handkerchief. In a placating tone, he resumed. "I can't control every variable. Did it occur to you I might have other projects I'm working on?"

He pushed out of the chair. "A phone call, Phil. That's all I needed."