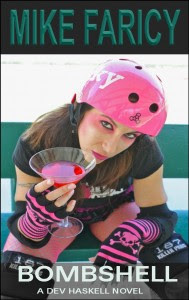 Describe your book in five words or less.
No redeeming social value.

Bombshell is my tenth book and the fourth in my Dev Haskell series. The tale is set in the world of roller derby. Dev is a private investigator of, shall we say, questionable merit. I was out one night and ran into a number of women who skate for our local roller derby team. They went on and on with these incredible tales of the crazy antics, the women, the names, suggestive uniforms and I knew Dev just had to be involved in this world. When I write I don’t work off an outline. I have a very rough idea of what the next move will be, but truthfully at the end of any day no one is more surprised than me at what has happened. I do have a couple of standards that seem to be in every Dev Haskell tale; He makes bad assumptions. He has a foot on both sides of the law. A woman invariably saves his neck and Dev will go on to screw up that relationship, too. All my tales are theoretically written with a sense of humor and even some romance.

No. As I stated initially I write books of no redeeming social value. My books are meant to be read for pure enjoyment. They are meant to be an escape from kids, the laundry, bills, work and just life in general. If there is any message I’d like to leave my readers with it’s that they enjoyed the escape and they should devour all my other books.

The hardest part of writing is that area between maybe page fifty and one-hundred-and-twenty. I heard it once referred to by John Sandford as ‘The Swamp’. You’ve laid out ‘the crime’ and now you have to maintain the reader’s interest and at the same time not get weighed down with tiny tidbit facts. The easiest part for me is that at base the Dev Haskell tales are all about people who find themselves in a particularly awful situation due to their own bad decisions. But then, bad decisions can make for interesting tales.

I’m currently working on another Dev Haskell tale, Tutti Frutti, due out around the first of the year. It’s really fallen together nicely. One of the things I’ve enjoyed about writing Tutti Fruttiis I got an e-mail from a fan a while back, very nice, reads all my books, but she mentioned Dev always seems to be with gorgeous, fantastic figured young women. Fair comment. In Tutti Frutti, he falls head over heels with a woman who’s maybe not quite so young, not the slimmest girl in the room and let’s just say she’s way more than he can handle. That has been a lot of fun and a heck of a lesson for Dev.

The genre, crime fiction, has always interested me. Nothing against any other genre but paranormal, vampires, or sci-fi just are not my cup of tea. One other thing that I wanted to accomplish, despite the humor I attempt to inject, at base my tales are believable and in fact most of the events I describe are taken from real life experience. Yeah I know, what does that say about me? As much as I enjoy reading crime fiction or spy thrillers I’m tired of a chief protagonist who is an ex-Special Forces guy, a secret computer genius who happens to be movie star handsome. The guy is a millionaire and his college roommate was the President. Get real! None of my characters are going to save the world from terrorists, international bank conspiracies or government coups. All the situations my tales revolve around are due to bad decisions people make, but then like I said; bad decisions make for interesting tales.

It’s really great. I get emails from people from around the world asking when is the next book going to be released? I’ve a host of fans who graciously post reviews and blog about my books. I also pay attention to comments from readers. Of course there was the time when one of my fans posted on Face Book, she had just had a lavender bubble bath and was going to bed with a glass of wine and Mike Faricy, meaning one of my books. My wife is Irish living in Dublin and not completely versed in US geography. I got this blistering phone call asking me how far was the state of Georgia from Minnesota and just what was going on? Pretty funny… ultimately.

I think probably something along the line of Why do I write? On the one hand I don’t really know except to say that I have to, every day. It’s very hard, solitary work and I really work at it, but I also love it. I tell people it’s a labor of love, capitol ‘L’ on both words. I work at my writing seven days a week, every week, all year long. Yes, you are correct I’m the dullest guy in town. I have friends or I read about people watching television three or four hours a day or even just their favorite shows. I don’t have the time to do that, I’m writing. I’m usually at the computer keyboard by 6:30 in the morning. I take a lunch break and then work until maybe5:00. In the evening I’m answering emails, god forbid promoting or doing an interview. I enjoy all of it, but at the end of the day it’s a lot of work. There is an inner drive or maybe a curse, depending on your point of view, that makes me write.

I think in a lot of ways it was pretty typical. First of all I’m indie published. The road that brought me to this point was really frustrating for me. I wrote I think five maybe six books, shopped them around to every publisher I came across dealing in the crime fiction genre. I’ve just described close to ten years of my life and a lot of rejections. A book would be rejected, I’d put it on a shelf and write another. When I talk about shopping the book around you don’t send a manuscript and in fact you don’t even send two or three chapters. What you do send is a standard three paragraph query letter. The first two paragraphs describe your work of genius and the third paragraph is a sentence or two about your wonderful self. Then you enclose a self addressed stamped envelope so you can receive your rejection. I led the league in rejections. By the way these rejections are invariably impersonal form notes usually just a sentence or two in length. They’re often printed on a 4x5 card and mailed off provided you’ve enclosed that self addressed stamped envelope without so much as a signature after the rejection. One sunny day a letter was returned to me. I had sent the letter to one of the big six New York publishing houses. The envelope was stamped on the front in purple ink, ‘Return to Sender’. On the back of my unopened envelope was a hand written note; ‘This does not fit our needs at this time’. They couldn’t even be bothered to open my envelope. A dim light went on in my thick skull; Mike Faricy from St. Paul, Minnesota doesn’t have a snowball’s chance with these guys. Fortunately, with the advent of the internet, e-readers and Amazon there is a side gate into the publishing playground, Indie publishing. I took it and haven’t looked back. That said, if a traditional publisher called tomorrow I’d love to talk and listen, but I think I’d also be fairly well grounded.

Thanks for chatting with me, it’s been great, please take a moment to check out Bombshell as well as all my other books (http://amzn.to/LdazuU ) and look for my next book, Tutti Frutticoming out around the first of the year. All the best and thanks again.

Mike Faricy is the award winning author of mystery suspense thrillers woven together with a rich strain of humor and even some romance. He and his wife live in Saint Paul, Minnesota and Dublin, Ireland.

His entertaining tales are populated with the sort of quirky, oddball characters we’d all like to know more about, but wisely prefer to keep at a distance. They serve not so much as examples as they do warnings to the rest of us. None of his characters will be saving the world from terrorism, international banking conspiracies or coups to topple the government. Rather, they’re individuals inhabiting a world just below the surface of polite society. The difficulties they find themselves in are usually due to their own bad decisions, but then, bad decisions make for interesting tales.

All of his books are stand alone, read them in any order you wish. Russian Roulette introduces the bizarrely devilish Devlin Haskell as a PI with a foot on both sides of the law. Dev’s adventures continue in Mr. Softee and the soon to be released Bite Me. Mike is currently working on his latest top secret project. He graduated High School from St. Thomas Academy and earned a BA in history from St. Norbert College.
Posted by SueFitz at 12:37 AM