Author Interview: Shuffle Up and Deal by Susan DiPlacido 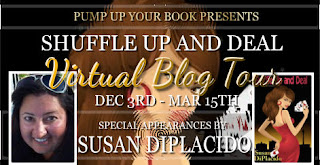 How did the ideas for your books come to you?
The book is my version of “The Color of Money.” I love Paul Newman and I loved that story and I wanted to do a fun play on it – someone mentoring someone else in a slightly shady business. I don’t think poker is shady, exactly, but it’s also not like mentoring someone to become an accountant. There are a lot of people skills involved so it easily brings up the question of if the two people who are supposed to trust each other really can.

Is there a message in your novel that you want readers to grasp?
No, not at all. I just want them to have fun reading it.

What is the hardest part of writing for you? What's the easiest?
The hardest part is making myself sit down and put in the hours. Everything else about it is quite enjoyable.

What's next for you? Are you currently working on or have plans for future projects?
I have another book out, “Lady Luck,” that’s also a comedy based on Hamlet.

Why did you choose to write for specific genre?
I write what I love to read.

What's it like hearing that readers are eagerly awaiting your book's release date?What is one question that you've always wanted to be asked in an interview? How would you answer that question?
I’m naturally very shy, so answering any questions is difficult.

What was your road to publications like?
I think I was actually one of the very lucky ones. I didn’t get a huge six figure advance like we like to daydream about, but I did find a publisher who was great at editing and really worked with me and believed in the book. 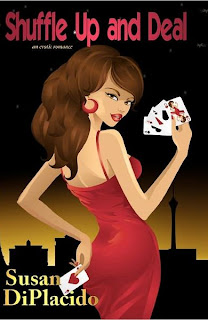 When Izzy and Nick meet in embarrassing fashion at a Las Vegas poker tournament, Izzy's secret dreams turn into a public nightmare. But despite her humiliation, she may have finally sparked Nick's interest in something other than cards. Before long, Nick takes a gamble on Izzy and raises the stakes when he offers to help her sharpen her game. But Izzy's convinced that Nick is bluffing and will fold his hand after he's had her on the flop. But a string of outrageous proposition bets and steamy trips on the poker tour, from Los Angeles to Miami, make these two fierce competitors realize that it may be time to put all their chips on the table. Will Izzy and Nick pair up? Or will they lose it all if they go all-in for each other? Sit down, ante up, and hang on, as Nick and Izzy get ready to Shuffle Up and Deal. 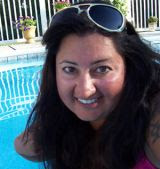 Susan DiPlacido is the author of 24/7, Trattoria, Mutual Holdings, House Money, Lady Luck, Shuffle Up and Deal, and American Cool. Trattoria was nominated for the Romantic Times Reviewers' Choice Award for Best Small Press Romance 2005, and her short story, "I, Candy," won the Spirit Award at the 2005 Moondance International Film Festival. American Cool won the bronze medal in the 2008 IPPY awards and was a finalist in the 2008 Indie Book Awards. Shuffle Up and Deal was nominated for the Romantic Times Reviewer's Choice Award for Best Small Press Erotic Fiction 2010. Her fiction has appeared in Susie Bright's Best American Erotica 2007, Maxim Jakubowski's Mammoth Book of Best New Erotica vol. 6 and 7, Zane's Caramel Flava, and Rebellion: New Voices of Fiction.

Become her friend her on Goodreads