Author Interview/Giveaway: Secret of the Songshell by Brian Tashima 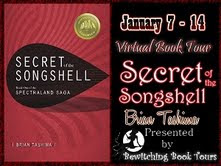 Born and raised in Hawaii, I moved to Vancouver, WA in 2000, where I live today. In addition to being an author, I’m also a guitarist, singer, songwriter, and dad to two wonderful kids.

I’d been an avid reader all my life and had dabbled in creative writing before, but it wasn’t until my son approached me a few years ago and asked me to write him a book that I really began to take the idea of becoming an author seriously. I decided that writing him a novel would be a cool thing to do for him and for myself as well, so I set out to create something along the lines of all the other young adult sci-fi/fantasy books that my son and I both enjoyed.

2. How long did it take you to write Secret of the Songshell?

The first draft took four months, and then I spent a year after that editing, revising and rewriting. Before I started working on the first draft, I made it my goal to write 400 words a day, no matter what. It helped that I had created an outline beforehand, which functioned as a road map of sorts.

I rewrote the plot about four times, but that was in the outline stage. Once I had an outline that I was happy with, I stuck to it for the most part.

If I’m just in there to browse, I’ll start out at the front and randomly wander from there. Typically if I’m going to a bookstore, I have a specific book that I’m there to get.

I read several books at a time, and I don’t have as much time to read as I would like, so I usually don’t finish any books in one month. Unless they’re one of those must-turn-the-page types.

My favorite character arcs are the archetypal monomyths, where an unassuming young person overcomes hardships and trials on their way to becoming the hero of the day. But as far as one particular character goes, I’ll have to say James Bond, because he’s just totally awesome.

(1) With one of my previous bands, I won a Hoku award (Hawaii’s version of the Grammys) for best rock album.
(2) I’m a half-decent cook. Cooking is fun; it’s like making edible art.
(3) Even though I’m from Hawaii, I’m not a good swimmer.
(4) My college degree is not in English or music, but in finance. I figured that if I wanted to make a living in the arts, I had to know how the business side of things worked.
(5) My all-time favorite band is The Dambuilders. Check them out.

I’m in the middle of Asperkids by Jennifer Cook O’Toole, The Kitchen Daughter by Jael McHenry, Slip by Tanya Savko, The Help (yes, I’m finally getting around to that one), and Wildwood by Colin Meloy.

That’s hard to say, there are so many good ones. My favorite books are the ones that force you to postpone real life while you read just one more chapter. The most recent books to have that effect on me were the first book of The Hunger Games trilogy and Room by Emma Donoghue.

I’m currently hard at work on the follow-up to Secret of the Songshell. Both books are part of a planned series of seven books called The Spectraland Saga. My goal is to release the follow-up in the fall of 2013, but we’ll see how that turns out. People are already asking me “where’s the second book?” so the pressure is on.

Secret of the Songshell is about a teenage guitarist with Asperger’s Syndrome who travels to another world where his unique brain waves can be combined with the sound waves of music to create magical effects.

In the beginning of the story, the protagonist, Joel Suzuki, struggles with the usual sources of teen angst as well as the challenges that his Asperger’s presents. Being a gifted musician and songwriter, he thinks that if he can become a rock star, all of his problems will be solved and he’ll be happy. He gets what seems like his big chance when his rock star idol shows up one day and tells Joel that the secret to success lies in an alternate world called Spectraland. But once Joel arrives there, he finds himself trapped by an evil warlord who threatens to take over both Spectraland as well as the Earth. So Joel has to embark on a journey to find the Songshell, an artifact that will help him defeat the warlord, and in the process he discovers the true meaning of happiness.

Joel is partly based on my son, who has Asperger’s. My son can do some amazing things that seem almost like superpowers to me, so I set out to create a character that could serve as a positive and empowering role model for kids on the autism spectrum — someone that saved the day with his special qualities, not despite them. I’m donating a portion of profits from the book to Autism Empowerment, a non-profit organization based in my town that works to promote autism awareness and education. 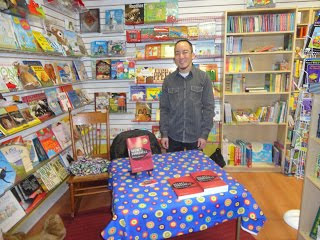 Brian Tashima was born and raised in Hawaii and has been a resident of Vancouver, Washington since 2000. In addition to being an author, he is a singer, songwriter and guitarist who has won a Hoku award (Hawaii’s version of the Grammys) and has had his music featured in short films, international compilations, and numerous other forms of media. He is currently a member of SCBWI (Society of Children’s Book Writers and Illustrators), Willamette Writers, Northwest Independent Writers Association, and three Vancouver/Portland-based rock bands.


Where you can find author Brian Tashima: