10 Things You Didn’t Know About Julian Rosado-Machain
English is not my native language, all the books are edited by a professional editor.
I can't write in Spanish! I did try I swear...
I've stopped trying to explain to my friends or people I meet what Guardians Inc. is about. Since it has mythology, fantasy, alternate history and Science Fiction I was told many times that I sounded like a crazy person.
I have two older brothers, one is a sci-fi fan, the other is a fantasy hard-core fan, both tried to convert me to their ways... I ended up right in the middle.
I rely heavily on the opinion of a couple of friends to finalize the first draft of each book and on my editor to help me fix all those grammar problems and other stuff,- Like run on sentences...
I am unabashedly, irrevocably, uninequibably a cat person.
I spell wrong and create words all the time... I even say them wrong some times.
The first book I read in English was Edgar Rice Burroughs' The Princess of Mars. The first book I read when I fully understood English was the same.
I was born in Washington D.C. in the Walter Reed Army Medical Hospital. I have an American birth certificate, but I can't be a U.S. Citizen because my dad was in a diplomatic mission in the U.S. so both countries consider me as being born inside Mexican embassy grounds AKA Mexico.
Yes it is complicated and I'm quite confused about it too. 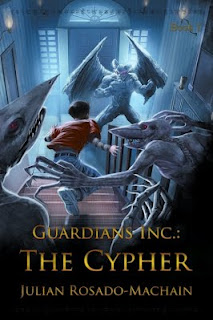 A chance reading of a newspaper ad will send 16 year old Thomas Byrne into the world within our world.

Following the ad he will find Guardians Incorporated. A seven thousand year old organization charged with protecting the balance between Magic and technology.

Through their guidance technology has kept Magic at bay since the Renaissance, but the balance is shifting and soon all those creatures we've driven into myth and legend will come back with a vengeance.

To protect the present, Guardians Incorporated needs to know the future. 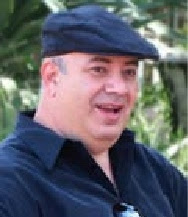 Julian has enjoyed pizza in three continents, holds a degree in graphic design, built armored vehicles and computers, handcrafted alebrijes and swears has seen at least one ghost.

He is the Co-owner of Hacienda de Vega Restaurant in San Diego, California and enjoys the sun with his wife, three children and cat.

Guardians Inc.: The Cypher is the first book in a series.