Author Interview: If It's Tuesday, It Must Be Trouble! By Kathleen Allen 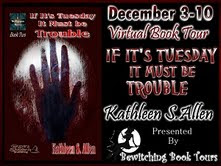 I figured out at a young age that writing helped me express myself so I started writing poetry. I remember having to memorize a poem in the first grade (evil teacher) and thinking to myself that I could do that. So, I did.

How long did it take you to write IF IT’S TUESDAY, IT MUST BE TROUBLE?

Not long. Once I got the idea, it flowed pretty well. I tend to work on more than one project at a time so it’s hard to say, I worked on it off and on for two or three months.

While writing how many times do you go back and rewrite a plot?

It all depends on the book. I am a pantser, meaning I write and edit as I go so I don’t usually have to go back to change the plot, just scenes and basic editing.

That’s easy, the young adult section then the mystery section.

In all the books you've read. Who is your most favorite character and why?

Mennolly from the Harper Hall series by Anne McCaffrey. She’s super talented as a singer-something I wish I could be---,she’s fearless and she has dragons. What more do you want?

I have lived in both NYC and LA. Bagels are my favorite food ever. I once had 13 cats (but I swear I’m not a crazy cat lady). I read Romeo and Juliet when I was in the third grade. I am a Doctor Who fan.

What are you currently reading?

I just finished A Cutthroat Business by Jenna Bennett. I tend to read mysteries and that’s how I got the idea of writing one, since I like reading them so much. I also read a lot of Young Adult fantasy books.

What is the best book you've read?

There are too many to choose but I love to read and read in all different genres. It all depends on my mood. I tend to reread Jane Eyre by Charlotte Bronte whenever I need to read a familiar book I know well. I enjoy the Victorian style of writing. In fact last year during NaNoWriMo (30 days and nights of literary abandon) I wrote a Jane Eyre mash up called THORNFIELD MANOR: JANE EYRE AND VAMPIRES. It’s available for free on fanfiction.net.

Any new projects coming up?
My second Young Adult faerie book in the Lore of Fei series is due to be released in Feb. 2013 called War of Fei. I just finished doing NaNoWriMo and am editing that book. It’s also young adult and an urban fantasy.

This is the second Mel Thompson, P.I. book. The first one is IF IT’S MONDAY, IT MUST BE MURDER. Mel is a former cop who was shot on the job and now has a permanent limp and works as a private investigator. She has a cop boyfriend who wants more of a commitment than she does. She’s fiercely independent and doesn’t want to rely on anyone but herself. In her last case (Monday Murder book) she helped out her best friend in order to find out what happened to her best friend’s daughter and Mel nearly died at the hands of a killer.

This case she goes undercover in the fashion industry to try and figure out who killed an up and coming fashion designer. Mel knows nothing about fashion, she wears T-shirts and jeans but she’s willing to learn in order to catch a killer. She doesn’t plan on liking the people she meets in the fashion house and she doesn’t plan on being in harm’s way again. But that’s exactly what happens.

Readers who like to read mysteries with female sleuths should pick it up. Even if you haven’t read the first book, each book in the series is meant to stand alone, so get it today!

Thanks for hosting me!
Kathleen


About the Author:
I am an urban faerie born without wings but I fly on the wings of imagination tethered to this mortal coil. Moonlight sustains me and sunlight devours me. Stars swim in my eyes and my soul bleeds on a daily basis. I am a writer.

Guest blogger every 5th and 19th of the month

Book Trailers on You Tube

Buy link from Amazon
Posted by SueFitz at 1:00 AM