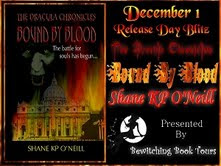 Wallachia. The chapel at Snagov.
December 1476.

The author developed a fascination with Dracula from an early age. Like many others he was enthralled by Christopher Lee’s portrayal of him on the big screen. It was in his late teens that he discovered Dracula the man and the love affair began from there. An avid historian, he studied the period in which the real historical Vlad Dracula lived, 15th Century Balkan, for many years. It followed from there then that with his love of writing he would always choose Dracula as his subject.
Away from writing, the author has a wide range of interests. He has lived and travelled all over the world. He has a love for all things historical, with a particular fascination for medieval Europe. Anywhere he travels he likes to search out locations with an historical interest. He is well read and in recent times has a preference for the work of James Patterson, Carlos Luis Zafon, John Grisham, Jeffrey Archer and Stephen King. He also keeps his library well stocked with historical texts.

For a time he played scrabble on the international stage and represented Wales at the 2007 World Championship in Mumbai, India. He has a real love of sport, most notably football, rugby union, cricket and boxing. His great loves in the football world are Manchester United, Glasgow Celtic, Internazionale and lowly Luton Town. His sporting heroes include George Best, David Beckham, Roy Keane, Ian Botham and Muhammad Ali. His only other activities away from these are long country walks and time spent with friends and family.