Guest Post/Promo: Cairo: The Mother of the World by Herbert L. Smith

When someone asks me about my ‘muse,’ my writing inspiration, I can only tell them that my love of Cairo, all of Egypt in fact, is all I need to set my descriptive and poetic responses going. Sometimes, people who have visited or lived in Egypt question my reasoning. They found the place to be less than ideal – far, far less, and can’t understand my reasons for loving the city and the country. I confess that I don’t understand fully, but am happily oblivious to many of the problems that confound everyone who visits, as well as a large portion of the population that lives in the country. I am not unaware or insensible to these difficulties, it’s just they aren’t sufficient to cause for me to flee from the place and never go back. Quite the opposite, I am magnetically drawn to Egypt and to Cairo, especially.

Cairo is a dirty, noisy, hot, distressed city. It has been called the noisiest place in the world and may well be. It has also been called the dirtiest, but I think that distinction best lies in Indian, or perhaps Chinese cities. (Unquestionably, Cairo is also very dirty.) The city is fraught with traffic nightmares and pollution, sand, relentless heat, an immense population scrunched together in a very small area, and a myriad of other things that create chaos, but it also has a vibrancy of spirit, colorful people, a wonderful sense of humor, and an attitude of survival against all the odds, that makes it scintillating in my eyes. I became attuned to Cairo from the very first evening as I arrived amid the sprawl of traffic on what might have been a freeway in most countries, but had every kind of traffic – even camels in a long line - and pedestrians, along its lanes. Cars and mule-carts went every direction, including the wrong way (obviously by choice), and I gaped in amazement at the staggering tableau that spread out around the Nile in all directions. I had never seen anything like it, and haven’t found such a tumult anywhere since.

Native food is not exceptional, but is decent. Hospitality, however, is beyond any reproach. When you are a guest in an Egyptian home you are Honored. There is an incredible display of concern for a guest’s comfort – genuine concern – and an interest in whatever information about your world you can bring to the conversation. Egyptian people are delightful – almost always – and full of laughter despite the situation many are in. They are indomitable. As I watched the 2011 revolution through videos taken live at the scene, my heart was in my mouth, and I fell into the scenario as much as was possible from where I was at the time. I empathized with the people and with the revolution and with the need they now have of securing a government that will serve the needs of the citizens rather than the desires and greed of men in power. It is almost too much to comprehend, but the Egyptians handle it uniquely and heart-rendingly well. They make me proud to have been among them, and one of my greatest desires is to return to Cairo for a lengthy visit. 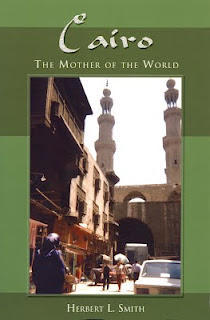 Excerpts from
Cairo: The Mother Of The World
Herbert L. Smith

“Cairo is a kaleidoscope of light and color. From the air, as I arrived for the first time, the city looked wearily drab and very much like the desert it sits on, but Cairo is no desert. Instead, a thriving, throbbing, turbulent city of tremendous contrasts and contradictions awaits on the shore of the Nile. Called “The Mother of The World” by her citizenry, Cairo works, plays, lives, and plans the future as she recalls a former glory that is still vigorously present.”

“Although Cairo isn’t the oldest city in the world, it is very old, and has risen from the past without sacrificing its oldest self. The city goes on living in a kind of renewed incarnation with each succeeding era. Cairo is both impossible and improbable, but it is as strong today as in the past, incorporating the very newest into the already existing mega-metropolis, and there is always a sense of the past clinging to the stones, wherever one goes in the city.
Some of the newest suburbs sit on ancient grounds, where temples and palaces and long vanished houses once stood, and where apartment blocks filled with families and hope for the future are fixed to the land today. The oldest parts hold streets and buildings that were much the same long ago, even as much as an entire millennium in the past. The oldest mosques and churches still witness to their grandest days, and the oldest houses are filled with families, some directly descended from the original builders who lived there more than five or six centuries in the past. This is indeed an old city, and although many things have changed, the spirit of Cairo, the collective memory of its ancient history, is palpable in the Cairo of today.”

“The expression that a picture is worth a thousand words may indeed be true, especially for those who are visually oriented, but I often favor words – words have a way of insinuating themselves into the consciousness more subtly than most pictures I have seen. There are many picture books, sometimes called photo essays, about Cairo, and there are online sites filled with pictures. These pictures can evoke strong memories, but written descriptions, filled with evocative phrases and ideas, create a world that is partly imaginary and partly experiential, whatever that experience may be. We bring ourselves more truly into written expressions than we are able to bring ourselves into a photograph or other realistic representation of a scene or situation.

So it is with my experience of Cairo. I love the entirety of the place, and find all kinds of enchantment within it. I do not, therefore, always want to see the city in hard, photographic dimensions, although I know they are there. I sometimes want to see the softer and gentler memories that I have assigned to the city from a recollection of my own encounters and adventures. The physiognomy of Cairo, its countenance or face, seems one of the best words I can find to describe this ‘picture’ of Cairo, to bring it to the fore, and to find the beauty of the city
beneath its rough exterior.” 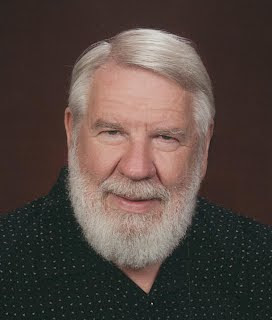 It has been my good fortune to live and work in schools and universities around the world. I started teaching in the California State University system more than thirty years ago, after a time working in secondary schools, went on to Egypt and the Middle East, and finally to Argentina. It has been a fascinating series of events, from one adventure to another, and I loved nearly every minute of it. (A few of the minutes were not quite so lovable for various reasons.)

Life as an expat lecturer and instructor led me into some unique and sometimes difficult situations, but my appraisal of the whole was one of amazement that I was able to get to so many wonderful places and enjoy the life of the people there. I taught English courses to students who had already developed skills in the language and was always happy to tell them about life in the U.S., as well as my appreciation of the life I led in their home countries. I would gladly do it all again with only slight changes here and there.

A sustaining hobby throughout my life is music. I am a pianist, organist and composer with many years of experience in church music. I found that wherever I went in the world, with the exception of Argentina, I was almost immediately working with a church, playing the services(usually on Fridays in the Middle East) regularly. Music is one of my fondest dreams as well as a ‘forever’ joy.

I now live in Oregon with my wife of fifty years, Glenda, and we love the beauties that surround us here. I will never tire of reliving the past, of course, either in writing or actually traveling, and any time I have an opportunity to return to Cairo or Doha or La Rioja, I am excited to go again.