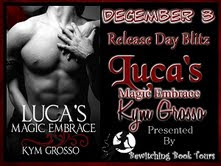 Book Excerpt
As he got halfway down the path, he watched Samantha stretch on the dock. He halted, admiring her firm ass as she bent forward to grab her right calf. His cock jerked to attention as he fantasized about ripping off her clothes and taking her from behind on her hands and knees right out in the open on the wooden pier. No one would see, he surmised, looking around at the isolated woods. Shaking himself from his thoughts, he sighed. He could not get involved with this human. He knew how fragile they were, how easily they could die. Luca refused to let that happen again.

Just as he thought he’d regained control of himself, his mouth dropped wide open. With her back facing Luca, Samantha crossed her arms in front of her and removed her flimsy, stretchy tank top. Jesus, what was she doing? He continued to watch in awe as she kicked off her sneakers, hooked her thumbs on the waist of her pants and stripped them off until she was standing on the end of the dock stark naked. She reached a hand up into her ponytail and freed her fiery mane; the soft tendrils scattered over her creamy pale shoulders, teasing the small of her back. The perfectly-formed globes of her buttocks called to him; his erection pressed tightly against his zipper.

Luca could not believe she’d stripped nude in front of him and every small creature in the woods. He couldn’t help but smile as she launched herself off the dock in a perfect dive. Did she know he was watching her? How could she not have known? He’d told her he’d keep an eye on her at the lake. Little temptress, what was she doing?

With preternatural speed, he arrived at the dock just as her hands breached the shimmering dark-blue water. Samantha bobbed up to the surface and spun to face him. He could hardly believe the reckless abandon she demonstrated, given that she’d been held up in a strange coven less than a week ago. She was resilient, young and full of energy, representing a zest for life that he’d long forgotten.

Samantha smiled as she waved to him to join her in the deep abyss. She called out to him, “Come in, Luca! The water’s great!” She laughed and dove again; her white bottom peeked out for a second before submerging yet again.

“Darlin’, I’ve got no suit. Besides, vampires don’t swim.” He wanted desperately to go in after her, but knew it would lead to so much more than a morning swim.

“You’ve got your birthday suit. Please, you’re not gonna make a girl swim alone, are ya?” she purred.

“Is it cold?” He was starting to waver in his firm decision to stay on shore.

“Naw, it’s plenty warm. It’s late August, had plenty of time to heat up. Come on!” she begged.

“You a good swimmer?” Luca asked.

“Yes. Why’re you asking?” she replied.

“Because I’m coming in to get you!” Losing all control, Luca quickly pulled off his white t-shirt and began to undress.

As he unzipped his pants, Samantha screamed playfully and started to swim away. Stripped naked, Samantha admired his rippling abs out the side of her eyes. She knew he’d be coming for her.

Breaching the water, Luca cursed. “Damn, it’s cold. You lied to me, woman. You’d better swim fast because I’m goin’ to catch you!”

Luca dove under the water once again, determined to catch up with the very slippery, naked woman who’d enticed him to jump into a cold mountain lake in the middle of the day. It had been at least a hundred years since he’d indulged in such a childish activity, but he simply could not resist her. While vampires could be exposed to sunlight, he was weakened to the state of a human during the day. Breaking the surface, he searched for her and spied feet splashing several yards from him. He dove once again, knowing he’d soon catch his prey.

Samantha gasped for air after racing away from Luca. She spun in a circle, treading water as she looked for a trace of him. The smooth lake gave no clues as to where he was. She knew he was somewhere. Somewhere close. Looking towards the cabin, she screamed loudly as hands came around her waist.

Luca pulled her close to him and began to tickle her mercilessly. “Ah, little witch, you lied to me. The water is nearly freezing. And since I can’t spank you in the water, this is your punishment.” He continued to tickle her as she laughed hysterically, thrashing in the water.

Luca stopped tickling her but didn’t let her go. Instead he let his hands move from her waist to just under her breasts, encircling her ribcage. Samantha relaxed back onto him, letting her head fall back onto his shoulder as they both floated on their backs in the peaceful reserve.

“I’m happy you joined me. I love it up here in the woods. It’s so peaceful.” Samantha wrapped her arms around his, fully aware of where his arms supported her. As they moved as one in the water, she could feel the hardness of him brushing her bottom. Yet she wasn’t afraid. She was aroused and excited that he’d joined her in such a very human activity.

“I’m happy you convinced me to swim with you,” Luca responded. “I haven’t done this in such a long time. I’d forgotten how wonderful it is to skinny dip.”

“Very old, indeed, my dear Samantha. I was turned in the eighteen hundreds. So I’m well over two hundred years old….give or take a few years.”

“Do you miss being human?” Samantha asked.

“No, darlin’. Being human is so ordinary. And now that you’re a witch, you’ve joined our little club of supernaturals. I sense your fear. But I promise you that you’ll be all right. In fact, you’ll probably love it once you find your magic.” Luca squeezed her tightly and kissed her shoulder.

“Ah, and there’s the rub my friend. I have no magic. Nothing. Ilsbeth seems to think there’s something about me, but I can’t do a thing. Believe me, I’ve tried. Nothing happens,” Samantha huffed.

“It will come, Samantha. I can smell the magic on you, and it’s as sweet as honey. It’s there. Maybe it hasn’t shown itself yet, but it will.”

“You sound so confident, Luca. I wish I could be like you. But I feel so defeated. Seriously, Luca. I’ve been kidnapped, forced into working at a sex club, beaten and then told I was a witch. I’ve had to take a leave of absence from my real life. I can’t tell anyone human what’s really happened to me. And now, on top of everything, you think I’m in danger, and I have to return to that God forsaken city where it all started. I just want to lie back in this lake and forget everything,” she confided.

“Do you remember what you told me that night we were at Kade’s?” Luca asked.

“Yes. No. I don’t know. I said a lot of things. I was crying. I was upset. What do you mean? What did I say?” Samantha laughed a little, knowing how confused she sounded.

“You said you were a strong person. And while I don’t know you very well, I believe that’s true,” he continued. “Since you’ve been here at the cabin, you’ve stared down a wolf, talked with an Alpha and held a knife to a vampire. You’re either crazy or strong, and I can tell you that I know it’s the latter. You’ll survive what’s to come. You can do this, Samantha.”

“Luca, where have you been my whole life?” she joked. She smiled, realizing there was something about him that made her feel better. “Maybe you’re right. Maybe I can do this, but I can’t do it alone. You make me feel like I get through this as long as I’m with you.” She’d never known such encouragement in her entire existence, and here was a man who had faith in her even when she didn’t have it in herself.

Luca’s heart beat against his chest at her words. He knew he shouldn’t fall for a human, but she was chipping away at whatever resolve he had left to stay away. Unable to resist her any longer, he kissed the side of her neck and slowly trailed his lips behind her ear. She moaned in arousal as he slid his hands up to caress her breasts. He wanted to take her there in the lake.

“Luca,” she whispered as he kissed and touched her. “Yes.”

With her words, he turned her around to face him, pressing his lips to hers. Their tongues swept together as they passionately kissed. Samantha wrapped her legs around Luca’s waist, aroused by the feel of his rock-hard cock bobbing up against the crease of her ass. She fingered his long hair and kissed up his cheeks as he licked her neck.

“Luca, please,” she panted. God, she wanted him. She wanted to forget everything in that moment but him.

“Samantha.” Luca wanted to stop, to tell her that they shouldn’t continue. She was so vulnerable after what had happened. As much as he wanted her, he didn’t want to take advantage either. And then there was his vow not to get involved with humans. But she tasted sweet as peaches on a warm summer day. So soft and slippery in his hands. “Mmmm…you’re so beautiful,” he murmured, unable to stop kissing her. He needed to have all of her.

As he was about to suggest they go inside the cabin, Luca tensed. He immediately released Samantha to stop and sniff the air. Smoke. He growled, baring his fangs.

Luca’s Magic Embrace is my second paranormal romance novel, which is the second novel in the Immortals of New Orleans Series. I have also written and published several articles about autism. I developed a late interest in writing after m12:01y son was diagnosed with autism and I started advocating on his behalf. Three years ago, I started my own website, www.AutismInRealLife.com and now blog and write articles for PsychologyToday.com.

I live in Pennsylvania with my husband, two children and our dog, Ace. My hobbies include autism advocacy, reading, tennis, zumba and traveling. New Orleans is one of our favorite places to visit with its rich culture and unique cuisine. But we also love traveling just about anywhere that has a beach or snow covered mountains. I love reading mysteries, romances and about all things regarding vampires, werewolves and other supernaturals.