THERE ARE NO SPECIAL REQUIREMENTS TO PARTICIPATE.

Just put up a post sharing the new ebooks you've added to your reader, computer, phone, etc. Sponsored by I'm a Reader, Not A Reader
You can grab the graphic I have on this post, make your own graphic, skip the graphic, whatever works for you.
I will put up a post each week that will include a new linky. The linky will be set as a blog hop so you can grab the code at the bottom of the linky to include with your post IF you want. These posts will go live on Thursday night so you can stop by on Fridays and link up your post IF you want.
Again there are really no requirements. You don't need to link to me or credit me or anything like that. Just share all your great ebooks. 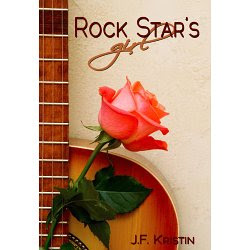 Emily Watts just wants a weekend break from the workaholic hours she’s taken on to keep her business – a popular fashion-snark web site – up and running. What she gets is overnight celebrity and a career-killing media scandal.

While taking time out to attend a concert in support of friend Jesse Cinder, a struggling musician, Emily meets Cory Sampson, the lead singer of a chart-topping rock band. When she agrees to a date with Cory, making entertainment headlines is the last thing she expects. Even so, it’s a minor surprise by comparison to her discovery that in the music world, media notoriety trumps all. Tabloid allegations erupt when Cory and fame-hungry Jesse use Emily for personal gain, and her tarnished image spells disaster – personally and professionally. To save the web site and writing career she’s made her life and dream, Emily must go from being a pawn in the Hollywood headline game to becoming the media mastermind. 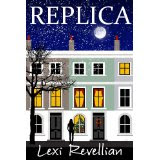 Still free? Click Here to find out!
Beth Chandler, bright, attractive but unassertive, is accidentally replicated in a flawed experiment at the government research institute where she works. A second Beth comes into being, complete with all her memories. To Sir Peter Ellis, MI5 chief, the replica is an embarrassment that must be hushed up and disposed of. Overhearing him, Beth Two goes on the run. With no official existence, homeless, penniless and pursued by Sir Peter’s agents, she has to find the inner strength and aggression to survive on icy London streets.

Meanwhile the original Beth, unaware of what has happened, becomes romantically involved with Nick Cavanagh, the spec op she believes is there to protect her. In fact, he’s hunting her double. Nick refuses to face his moral doubts about Beth Two – as far as he’s concerned, it’s not his problem. As events unfold, and the situation grows more complicated, he has to decide whose side he is on. 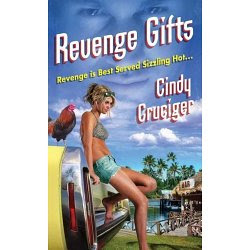 Still free? Click Here to find out!
Tara Cole specializes in revenge. In fact, she’s an expert. Lace pillows filled with cat hair-for your least-favorite, most allergic relative; boxer shorts that set off metal detectors-for your cheating spouse; and her best seller at RevengeGifts.com: chocolates for your worst enemy, so you can watch gleefully as she packs on the pounds.

Tara’s best friend warns her that all this revenge is damaging her karma, but Tara doesn’t care about her next life-she wants to enjoy this one. Besides, her kitchen is full of cranky ghosts. Tara figures she’ll be the same one day, when she leaves the mortal plane… And that might happen sooner than thinks.

Mai Tai One On by Jill Marie Landis


Six months ago, if anyone would have told Em Johnson she’d end up divorced, broke, and running the dilapidated Tiki Goddess Bar on the magical North Shore of Kauai she would have told them to shove a swizzle stick up their okole.As if all that isn’t bad enough, when an obnoxious neighbor with a grudge is found dead in the Goddess luau pit, suspicion falls on Em and the rest of the Goddess staff. With the help of a quirky dance troupe of over-the-hill Hula Maidens, Em and the cast of characters must ban together to find the killer and solve the mystery before the next pupu party. JILL MARIE LANDIS has written over twenty-five novels, which have earned awards and slots on such national bestseller lists as the USA TODAY Top 50 and the New York Times Best Sellers Plus. She is a seven-time finalist for Romance Writers of America’s RITA Award in both Single Title and Contemporary Romance as well as a Golden Heart and RITA Award winner. She’s written historical and contemporary romance as well as inspirational historical romance, and she is now penning The Tiki Goddess Mystery Series, which begins with MAI TAI ONE ON.

When Caro Lamont, former psychologist turned pet therapist makes a house call to help Kevin Blackstone with his two misbehaving German Shepherd dogs, she expects frantic dogs, she expects a frantic dog owner, she even expects frantic neighbors. What she doesn’t expect is that two hours later the police will find Kevin dead, his dogs impounded; and that as the last person to see Kevin alive (well, except for the killer) she is suddenly a person of interest, at least according to Homicide Detective Judd Malone. Sparkle Abbey is the pseudonym of two mystery authors (Mary Lee Woods and Anita Carter). They are friends and neighbors as well as co-writers of the Pampered Pets Mystery Series. The pen name was created by combining the names of their rescue pets – Sparkle (Mary Lee’s cat) and Abbey (Anita’s dog). They reside in central Iowa, but if they could write anywhere, you would find them on the beach with their laptops and depending on the time of day either an iced tea or a margarita.) 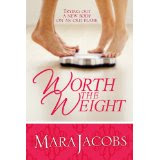 Worth The Weight by Mara Jacobs

A New Body…A New Life…An Old Flame? Lizzie Hampton is literally a shadow of her former self. Having lost half her body weight, she’s headed to her small hometown to test out her new body on an old flame. Just a harmless fling to get her self confidence back before she returns to the city and the new man in her life. But Lizzie’s plan has a few bumps in the road. Finn Robbins can’t believe Liz is back in town. Desperate to be the holder of her innocence eighteen years ago, he never got the chance. Now she’s back and he can finally check her off his to do list.
But her friends, his son, and the mysterious Annie may have something to say about that.
Posted by SueFitz at 12:16 AM

Email ThisBlogThis!Share to TwitterShare to FacebookShare to Pinterest
Labels: Feed My Reader Friday