Book Excerpt
Faith tongued my ear and moved on, leaving me quite damp. I don=t know what some parents think about raising children, but Grizzly=s methods leave something to be seriously reviewed by the Committee of Public Knowledge and Enlightenment. A young lady should definitely not be brought up and educated in an all-night snack and beverage emporium. And she should at the least learn to respect her elders. I dragged my tired carcass onto a pair of flat feet and headed for the exit sign.

The rain had stopped but the early morning air remained chill. I often thought things out clearest while strolling during these purple-grey hours before the sun cleared the buildings. My own little rooms were only blocks away. After the first block I knew I was being followed.


The empty street stretched out ahead, a long mist-clad tunnel of dark shadows and faint gaslight. One or two of the street lamps in the next block had already burned out, leaving gaps of pure blackness not yet touched by the yawning whisper of the dawn. There were at least two of them trailing behind me; I could tell that much by the muffled footsteps. Which two, and why they were not bothering to hide their approach, I could only guess at. But if I were a gambler, I=d wager Bertha=s next pay cheque that they had some connection with our little lost love, dear Rupert. Passing through the pale ring of light on the sidewalk cast by the next lamp, I paused, slipping my left hand into the glass knuckles in my coat pocket, and casually turned around so that my followers would be caught in the glow.

AGood evening gentlemen, taking an early morning stroll? I don=t believe I=ve seen you in the neighbourhood before.@

The Vampire smiled, fixing his sunken black eyes upon me. The more elderly and taller partner of the pair, he stood motionless, long grasping hands dangling out from the sleeves of his greatcoat, thin fingers twitching. The Demon shimmered silently beside him, the light sparkling on his green scales. Shorter and stockier than his cadaverous companion, he licked his lips.

The bloodsucker spoke first, in a voice that echoed as a cross somewhere between coarse sandpaper and an untuned fiddle. AI believe you know a close acquaintance of ours, a young Master Rupert? We are searching for him.@

The Vampire drifted to the nearer edge of the dim circle of light. The Demon faded toward my right and the deserted street. I loosened the splatter gun with a slight move of my shoulder.

AOh dear, we just want to speak with the boy. What can you tell us of his whereabouts?@

Not only was this parasite on the ripe side of the last century, but he had a set of bad teeth and nasty breath I could smell from ten feet away 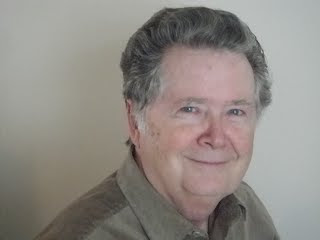 A reader of genre fiction since a very early age, got down to serious attempts at writing over thirty years ago, although employment kept getting in the way.

I did write a considerable amount of non-fiction during my business career, enough to be listed as a professional writer by the Canadian Authors Association.

Hobbies include trying to keep on the good side of my wife, keeping track of my children and grandchildren, and wrestling the blasted cat off of the keyboard. In my diminishing spare time I sail on Lake Winnipeg and try not to get lost.

A current member of three writing organizations, for several years I was in charge of the judging for a national Canadian history book contest, and chaired a writer’s workshop in Winnipeg that self-published an anthology, including three of my pieces: a sci fi piece, an attempt at an epic poem, and a true tale of how I almost drowned my brother and his wife in a storm the first year I owned a sailboat.

I currently review science fiction and fantasy genre novels and anthologies for an on-line magazine aimed primarily at school libraries. I’m losing track, but I have done somewhere over 60 reviews so far.

In 20I0 co-authored a non fiction history: “The Rotary Club of Winnipeg-100 Years of Service”.

Through BURST Books, writing as R.J.Hore, I have a medieval fantasy tale of murder and intrigue entitled “The Dark Lady” that came out in February 2012 and a fantasy detective story scheduled for December 2012 called “Housetrap”. Housetrap is designed as the first in a series of novellas; I have three others in the set already completed, but not scheduled, as of this date: “Dial M for Mudder,” “The House on Hollow Hill,” and “Hounds of Basalt Ville.” Already scheduled for publication, I have a novella “Knight’s Bridge” another medieval tale arriving in March 2013, and a full length novel, again a medieval fantasy, working title “Pawn, Queen, Checkmate,” coming out in April 2013.

And of course, I also have a large stack of completed manuscripts in various stages ranging from a “What If” — the North Americans discovered Europe first, set in 1215AD – to a contemporary bickering married couple swept away to an alterative universe, or a futuristic tale of a lady archeologist set in outer space.