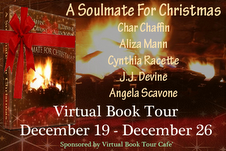 
Well, I’m a displaced Alaskan, born in New York, who found a niche in the Last Frontier and who now wants to go home more often. Once a year simply isn’t enough! ::cries:: When I’m not in Alaska, I’m on a farm in New York. Thirty-seven years ago I married an Air Force man, and then spent a lot of time on the move. Funnily enough, most of our moves occurred after hubby Don retired from the AF. Sometimes the hunt for decent jobs sent us all over the US, and other times the need to connect with our families got us packing it up. We’ve lived in six different states, and I’ve been in all fifty states at one time or another in my life. Plus Canada and Mexico!
I’m a book fiend, a classic car fanatic, a chocoholic, a sun worshipper, a dog-lover, an ultra-conservative, I know all kinds of ways to improve any recipe, don’t mind ironing stacks of clothes, and I adore my family above all else, including writing. Though the writing does come a close and tight second! And when my garden decides to be bountiful, I spend too much time canning old-fashioned cucumber chunks, and corn-black bean salsa. Every fall I make a ton of candy applesauce. Oh, and I collect copper. I have everything from a copper spitoon to copper jewelry.

I never set out to be a writer. I can’t say it was any kind of grand realization or “Eureka!” moment. I liked to write long letters to family, and Don said my letters read like little stories and I should try writing a short story. So I did. It was fun, so I wrote more short stories, each one getting longer and longer, until Don said my short stories were starting to read like a book, and why didn’t I try writing a novel? So I did. I wrote PROMISES TO KEEP which became my debut novel. Years after I wrote it (and revised the poor thing to death!), I finally sold it. I can honestly say I wouldn’t have done any of it, if Don hadn’t once said to me, “You know, those letters you write home sound a lot like little stories.” He’s my coach, my cheerleader, and my writing backbone, not to mention a heck of a publicist! He’s definitely my inspiration.

2. How long did it take for you to write “I Know You,” your contribution to the anthology, “A Soulmate for Christmas?”

Oh, I can whip out a short story pretty fast! I’ve written so many of them and I really enjoy the challenge of a short story as opposed to writing an entire novel. You have to tell your tale in a window smaller than forty pages, and that’s not always easy. But for “I Know You,” I had it finished in a week. Another week for polishing, and I was done. I had most of it mapped out in my mind before I even touched the keyboard, and it really flowed for me.

All the time. I’m an editor as well as a writer, and I constantly edit. I’m a NaNoWriMo disaster, I promise you! I polish, edit, then polish and edit some more, and then eventually I can move beyond Chapter One. Usually by the time I get to Chapter Ten, I’ve already changed the plot a couple of times!

Right to the paranormal section! I love vamps and weres. I’ll always look there first, then I sweep through the horror aisle. Before I leave the store, I’ll linger in the erotica. ::wink::

I never stop! I get asked for reviews a lot, so I try to fit in several for review, plus I have an ever-growing stack of manuscripts that need to be edited. When I can spare time in between all of that, I play catch-up on my Kindle and my bookshelf which is just scary-looking with its masses of books. I read first thing in the morning (around five AM) and last thing at night before I fall asleep (midnight or later). If I awaken in the middle of the night, I’ll read ten pages or so. I put the Kindle app on my iphone. It was a very smart move!

6. In all the books you've read, who is your most favorite character and why?

I’m a huge J.D. Robb fan, and I absolutely adore Roarke. In over thirty books, he’s never disappointed me. Strong yet curiously vulnerable, sexy as hell, he’s one of the most delicious heroes I’ve ever read.

1. I sang with the Sweet Adelines (female barbershop chorus) for five years.
2. I designed costumes for a light opera theater in Fairbanks, Alaska. My specialty was creating wigs and making shoes, and I usually designed Renaissance and medieval clothing. Dressing cute actors in tights and cod-pieces has a charm all its own, I guarantee. Hee.
3. I can dislocate both of my shoulders. We won’t get into how I discovered this talent . . .!
4. When I listen to music, I must have the original recording of whatever I’m listening to, otherwise it irritates the bejeebus out of me. When Burl Ives re-recorded “Have a Holly Jolly Christmas,” I about flipped. What was wrong with his original recording? That was thirty years ago, and I still haven’t gotten over it. Don’t even get me started on truncating songs to make them fit into a four-minute radio slot! When I hear “Don’t Fear the Reaper,” I want the guitar riff in the middle, dang it all. Don’t leave that out, or else I’ll get irate.
5. I can recite enormous chunks of movie dialogue from my favorite films. There are a few I can quote from beginning to end, all the characters. I passed this down to my daughter and sometimes, just for the heck of it, we’ll get on the phone during the holiday season and quote “Trading Places” and “A Christmas Story” word for word. It’s a talent, honest.

Right now, in between all the editing, I’m working my way through several Soul Mate authors’ excellent novels!

I’m currently working on my third novel, a vintage romance titled, “Jesse’s Girl.” It takes place in Midwest Ohio, 1965, and the plot centers around a young man’s return to his home town to prove his innocence for a crime he didn’t commit, and to reclaim the girl he’s never been able to forget.


A SoulMate For Christmas, five stories that celebrate the wonder, the passion and the spirit of love during the Christmas season.

I KNOW YOU, by Char Chaffin:

Star-crossed lovers, united by death on Christmas Eve, search every fifty years to find each other again. 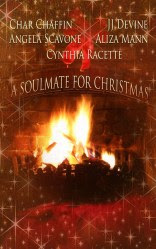 A VAMPIRE FOR YULE, by JJ Devine:

Two lonely hearts come together during the holidays and discover their destiny.

Would-be high school lovers Harper Stellar and Alexis Alston are back together to save his family business during Christmas shopping season and hopefully correct his mistakes of the past.

TO GRANDMOTHER’S HOUSE WE GO, by Cynthia Racette:

A husband and wife, driven apart by tragedy, are given another chance during Christmas in the country.

A woman’s need to reveal the truth could ruin the holidays and cost her the man she loves.


Giveaway - $15 Amazon Gift Card to those that purchase the book